In my last post, Going Direct Drive - II, I have shown a few numbers on different scenarios where each scenario represented 4 different designs of the quadrupole motor.
However, I was unclear if each different design of quadrupole motor were powerful enough to move my Toyota Yaris. Now, since I know the available torques with different design, it’s now time to calculate the required toque and power according to the vehicle mass and parameters imposed in the design. From there, it will be easier to design the motor’s minimum specifications.
Also, a lot was to deal with the weight and the mass definitions. Reviewing a few of my notes and searching on the internet for some of my un-answer questions, I finally found does answer about the weight and mass. As an example, when you take the weight on a scale, you are not measuring your weight but your body mass! Weights take into account the gravitational pull and the unit should not be in pound not kilogram.
Because there was a lot of confusing around the mass and the weight, mass is express in kg (lbs) and weight will be express in N or kg/m2 (lbs ft) in this blog.
First, a few data about the car.

Three important forces act on the vehicle and are calculated according to these formulas.
The natural force or the actual weight in N
(1)   Fn = m g sin (ϴ)
The rolling resistance force of the tires:
(2)   Fr = Fn Cr cos (ϴ)
The aerodynamic drag force:
(3)   Fd = ½ ρ cd A v2
And the slope:
(4)   F = Fn + Fr + Fd
Power requirement on a 1% slopped road and 100km/h (acceleration is null):
First, let’s start by calculating the power requirement. The equation is below:
(5)   P = F v
P is the mechanical power in watt (W) and v is the speed in m/s. The total force (whitout acceleration) while be 854.7 N. So the power requirement for a speed of 100km/h (27.8 m/s) will yield at 23 760W.
For a 2 wheeler, each will have to power half of the total force which is 11 880 W. This is nominal or minimum power to move my Toyota Yaris.
To covert speed (linear velocity) to rev/s (rotational velocity), we simply use equation 5 below:
(6)   ωw = v / rw
Where v is the linear velocity of the car in m/s and rw is the radius of the wheel in m.
In a worksheet like excel, I’ve put in does numbers and plotted the trend that is shown here.

Below is the torque per wheel trend. 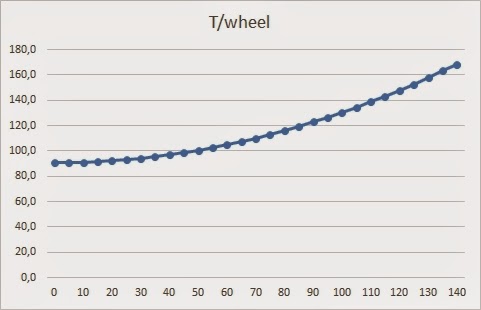 Let’s compare this to the 4 scenarios of my last post.
First, the power capability of the quadrupole is calculate from this equation 76.
(7)  Pe = Te Gr v/rwheel
Where Pe is the power from the electric motor, Te is the torque capability of the motor in Nm, Gr is the gear ratio between the wheel and the motor, v is the vehicle velocity in m/s and rw is the radius of the car wheels traction in m. The gear ratio is 1:1 (1) since there is no gear reduction between the motor and the wheels.

So, all current designs do not meet the requirements excepted for Scenario 4 at first speed but I will never be able to reach top speed of 140 km/h because the load per wheel needs to triple. In scenario 4, the current is set at 50A load. I will need at least 222Nm of torque to reach the top speed of 105 km/h. The currents designs cannot handle that much current. So, one easy thing to do is to triple the depth of the motor; passing from 76mm to 228mm, almost 9 inch long.
But, the quadrupole was first design to handle speeds up to 6000RPM and to be connected to a reducing gear like a car transmission and differential.  Also, I have another project; I intend to build an XR3 3 wheeler vehicle from Robert Q. Riley Enterprises. According to their specifications, the Scenario 4 will do the job because I need 13 kW to reach 140 km/h. So with minor modifications such as adding winding to the outer stator will enhance the MMF.
Posted by Donald at 19:32 No comments: